The Top selling K-POP Groups in Japan in 2021

The top selling K-Pop groups in Japan in 2021 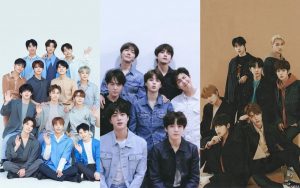 The year is almost coming to an end and the time to total up the sales numbers.

Recently, one netizen shared the sales results of the top-selling K-pop groups in Japan on Oricon charts in 2021. According to the charts, BTS is ranking in at number 1 so far with 1,880,541 album copies sold, followed by Seventeen with 798,476 album copies, and ENHYPEN with 424,936 albums sold this year.

Starting from fourth place was TXT, followed by TWICE, NCT 127 at sixth place, then ASTRO, Stray Kids, NCT Dream, and then SHINee at tenth place. 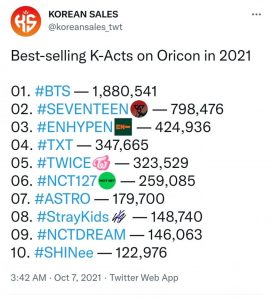 Netizens were surprised to find the top 4 K-pop groups to sell the most albums were from HYBE labels. Netizens commented, “BTS has a crazy number of album copies sold,” “all the boy groups on the top 4 are from HYBE labels,” “There’s no exception to BTS, everyone loves BTS, lol,” “BTS has overpowering album sales number,” “HYBE Label is crazy,” “ASTRO is amazing being at the top ten among the groups from large companies,” “Wow, BTS sold over twice as much as Seventeen, that’s at second place,” “TWICE is very popular definitely I guess,” and “Each of the groups is amazing but SHINee is epic. They’re still so popular.”

ateez as stuff i did